The Rain in Erie Falls Mainly on the Attorney 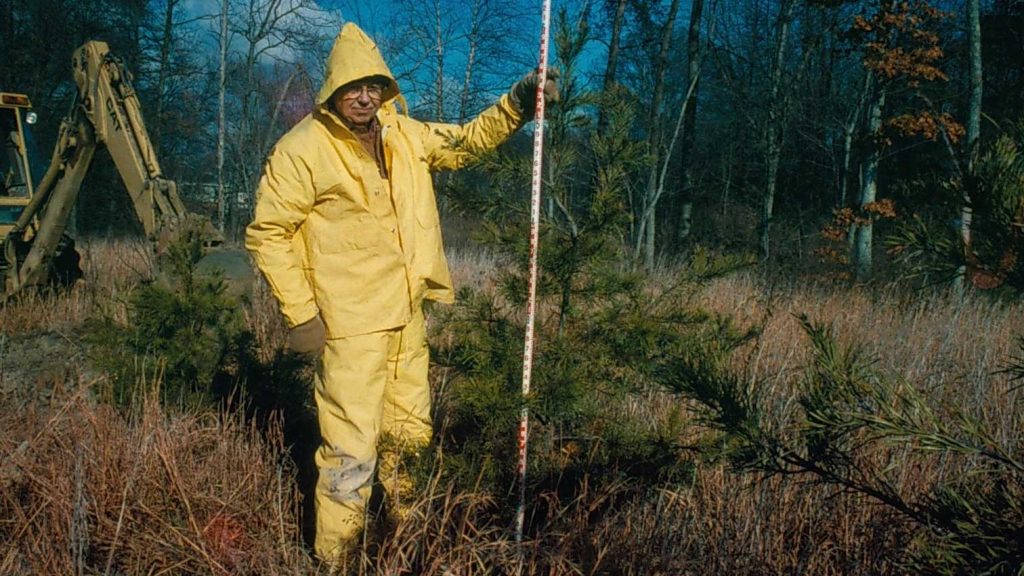 [Blake Parker worked until retirement for the U.S. Department of Agriculture, Soil Conservation Service; now Natural Resources Conservation Service. He was the principle author of the soils portion of the 1987 Wetland Delineation Manual produced by the U.S. Army Corps of Engineers and a member of the National Committee on Hydric Soils. After retirement, Blake taught courses with the Wetland Training Institute and did consulting work – often times for legal cases. He related the following story from his post-retirement days.]

I got a call from an attorney in Erie, Pennsylvania, saying that he had a client that was being accused by the federal government of violating the Clean Water Act by dumping fill in some wetlands.

He said, “Would you mind coming up here and looking at it?” I said “Yes, well I’ll be glad to come.” And I said to myself “If you’ve got the money, then I’ve got the time.”

He said “We got a judge that’s old, and he isn’t going to let us dig but six holes out there so we got to be pretty careful. If you’d come up here and look at it I’d appreciate it.”

So I flew in there and got me a motel room. That night I’m sitting there looking at that soil survey and I was looking at the weather data. And I don’t know why, but it just so happens, I was looking to see how much rainfall they normally get in that part of the world. I was there in May – well, I was there the second day of June – and I looked at the soil survey and the weather data said from the weather station right here in Erie over the last 35 years, the average annual precipitation in this county is five inches, Okay. I looked at the TV and I had the weather channel on and they gave the amount of rain that they had in Erie County in May, which was 5.6 inches. Okay. And they normally get 5 inches – the average for 35 years.

And he’s sitting down there and he said “I’m going to tell you something.” He said: “When we get out there tomorrow, it’s going to be wet. But,” he said, “We’ve had the wettest May on record.” He said, “It has rained more than it’s ever rained.” He said, “And that’s the reason it’s going to be wet when we get out there.” And I said “Okay.” And we talked a while and I thanked him and he left.

We got out there the next morning to the site, and we had five attorneys and three of us people that were going to do the work. And this guy, of course being the attorney for the landowner, had to give us a little speech before we started. And he started off by saying, “Now people, the reason the ground’s wet and the reason the area is covered in water, we’ve had the wettest May on record here.” He went on and when he got through, I said, “Could I say a word?” He said, “Sure.” And I said, “Let me just sort of tell you what’s going on here so far as rainfall is concerned.” And of course I’d never been there before. I said, “We’ve got a soils survey” and I turned to the page and I said, “Here’s the weather information for the past 35 years. And it says right here, by the weather bureau, that the average rainfall in this county in the month of May is 5 inches.” And I said, “According to the weather bureau last night, on the weather channel, in the month of May we had 5.6 inches here.” And I could see that guy’s face – his neck started turning red and his face started turning red. He didn’t like what I said and he turned over to me and said, “Well, it’s a hell-of-a-lot wetter than it was last year.”

So there is a lot of information in there that you can get. You don’t have to take someone else’s word for it. I’m sure that guy wasn’t trying to influence us, he just had a short memory.