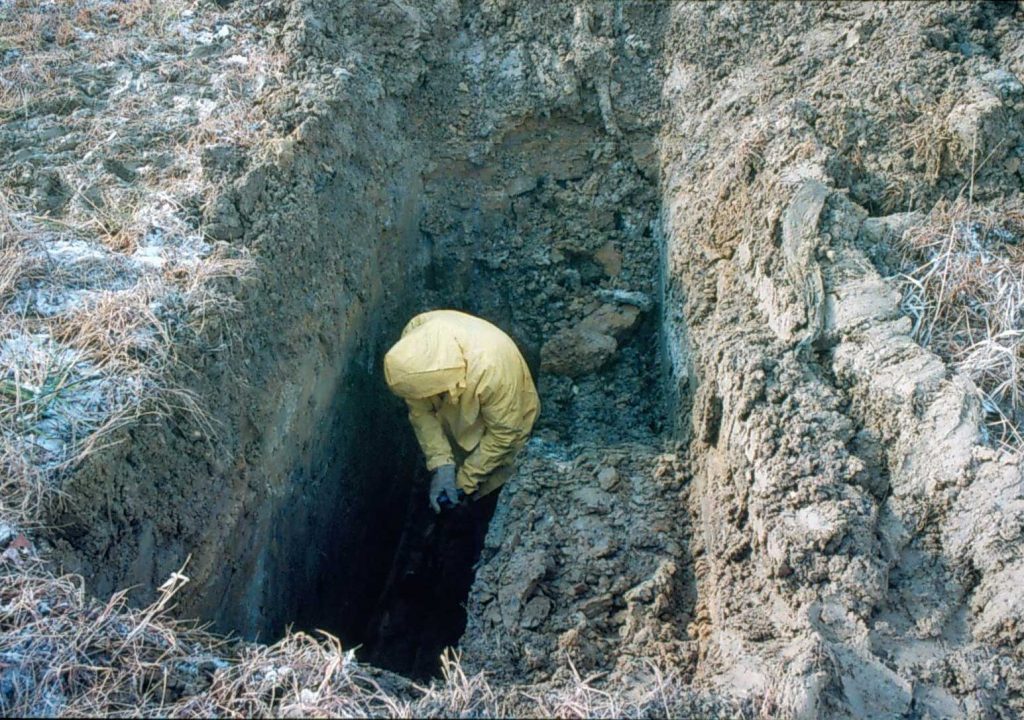 We were in a long-leaf pine plantation and it didn’t have any underbrush. All that was on the forest floor was pine needles. And this guy had run into a soil that he’d never seen before. He said, “would you go out there and look at it with me?” I said, “Okay.” We went out there and looked at it and I said, “You know, this is unusual.” I said, “let’s sample profile this.”  So we did. In case we set up a new series, we’d do that again.

So we dug a pit and it was probably about eight feet long and about six feet deep. Because you have to sample down to at least the depth of the profile distance, which is two meters by taxonomy. And we dug that hole and threw all that dirt up like a grave and had a big mound of dirt. And I had laid my map-board down on the side of the hole and we just had steps going in there, ya know. And we’re digging that hole – the guy with me was named Grant Mattox.

We got through digging and we decided we’d sample starting at the bottom coming up so that we wouldn’t disturb anything on the way up. I said I’d get some bags – we had soil bags to collect the samples in. I said, “I’ll just go out here and get some samples.” And I started up that step, and I looked at that darn diamondback straight in the eye as I started out of that hole, ya know. Come out with something – I don’t know what I said.

Grant said, “What’s the matter?” I said, “There’s a big diamondback laying here by the hole.” He said, “What are we going to do?” I said, “Well, we certainly can’t come out up towards these steps. I guess we’ll just climb the wall on the other side.” I said, “You take my foot, help me get out of this hole, and I’ll go out there and see what he’s doing.”

Well, I went around there and that thing was laying right on top of my map board all wound-up, ya know. Just sitting there, with his tail up – didn’t make a sound. Just looking, ya know. And I guess – I don’t know – I guess that fresh dirt or vibrations had peaked his interest and he was going to come and see what we’re doing, ya know. I killed that snake and it never rattled: never made a sound. I killed it with a shovel – with my spade. I whacked the s___ out of it. Just hit it across the back – you don’t have to hit it hard – just hit it across the back and it breaks its back and they can’t do anything. Can’t get away, can’t strike; they can’t do anything but lay there and rattle. But that wasn’t the biggest snake I’ve ever seen – but it was a big one. I’ll tell you, they grow some healthy snakes in that part of the country.