Tales from the Swamp: Remembering 9/11

by Charlie Newling and Bob Pierce 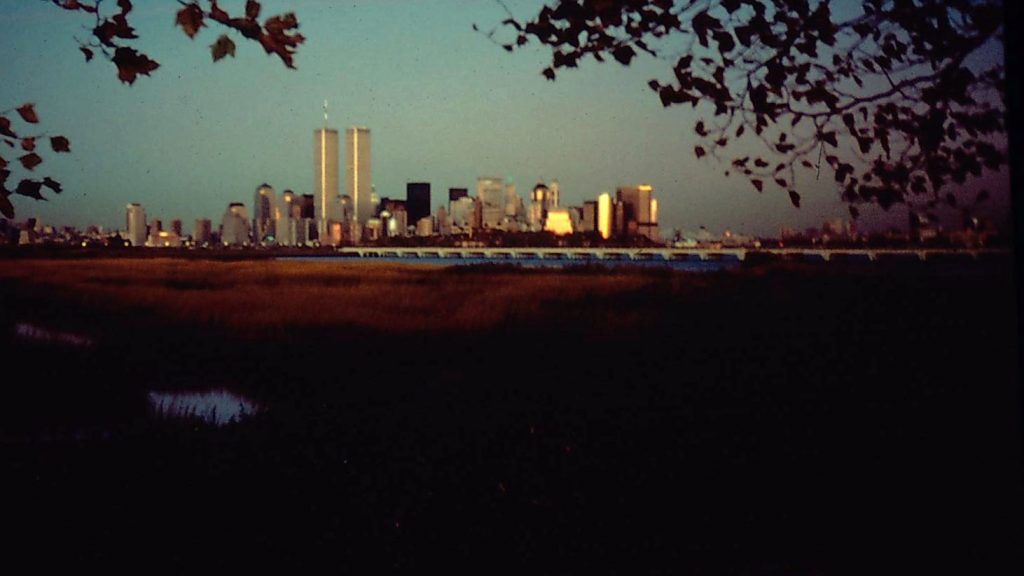 NYC from next to Liberty State Park in NJ during a wetland delineation in 1991.

On September 11, 2019, Bob Nailon, a colleague with Cardno in Houston Texas sent Charlie a short email which he forwarded to me and paraphrased below:

Lest we EVER Forget 9/11 and the sacrifices made.  Everyone remembers where they were that day.  I was on the Houston Ship Channel in a boat collecting GPS and water depth data on a barge spill follow-up.  An HPD helo was overhead watching our every move.

On 9/11/01, I was teaching a Basic Wetland Delineation course in Kalispell, Montana with Bob Pierce, Blake Parker, and Tom Straw.  When the news hit, I was lecturing.  I stopped momentarily to assess the situation.  Then I announced that I would keep on lecturing but granted “liberal leave” policy for anyone who wanted to make phone calls, watch the news, take care of personal matters, etc.  I explained that I was continuing the lectures because to stop would be just what the S.O.B.’s that perpetrated this crime would have wanted to happen.  (Screw them!)  At the end of the day, virtually everyone in the course loaded up into the two 15-passenger vans we had rented for field trip transportation and all 25 or 30 of us went down to the local Red Cross blood drive to donate blood.  When we got there, in little Kalispell, MT, there was a line almost two blocks long of people waiting their turn to donate blood.  Around 6 PM, a couple of staffers came out to explain to those of us in line that the Red Cross staff was overwhelmed.  They had been working since early that morning and were becoming exhausted.  The part of the line we were in was outside the building.  However, the Red Cross staffers explained they already had so many people inside the building that they would be working well past 8 PM and the exhausted staff would need a break.  They graciously thanked everybody for volunteering to donate but asked if we would kindly return on another day.  What happened on 9/11/2001is still vivid in my mind.

As the week progressed, we all discovered that the airlines were shut down and there would be no flying home after class as most of us had originally planned.  However, prior to the terror attack, I had a rented a car and the rental agency graciously let me keep it for a one-way drive back to Tacoma, Washington where I lived at the time.  One of our stranded students rode back with me as far as Tacoma where he linked up with a relative who had a car and drove him the rest of the way to his home in the Portland, Oregon area.

Charlie—neat story!  Kudos to you and the class for standing in line for the blood drive. I took your WTI delineation course in Kalispell in 1993 with you and Bob Pierce.  Neat area! I remember the mint farms up there and the contracts they had with Wrigley’s.

Also remember going in to a chainsaw shop and seeing a T-shirt with a Campbell’s soup label that said “Cream of Spotted Owl.”  For years, I wish I had bought one of those shirts…

Also enjoyed the visit up to Glacier National Park.

I had forgotten you had attended one of our sessions.  Thanks for reminding me.  Thanks for attending our course!  Goodness, 1993?!  That’s a while back…  Did you happen to frequent the Moose Saloon while you in Kalispell.  The wood clapboard exterior supposedly dated back to 1890.  The floors were well worn wood, it was dark inside.  I remember the clientele including mostly cowboys complete with hats drinking beer from long-necked bottles.  But what I remember most was the interior of the Men’s room.  It was pretty much like any other Men’s room I’ve ever seen except for one thing that made it unique:  the sink.  The sink was elevated to height that to wash your hands, you had to reach up to above eye level.  My first impression was essentially, “what idiot would plumb a sink in this manner?”  It later occurred to me that the purpose of the elevated sink was to prevent drunk cowboys from peeing in it.  Ingenious!

Charlie–I think that’s the place we went after we finished our classes that week!  I do remember that sink.  That’s funny….

From your classes, I’m still using the same delineation techniques and principles today.

We’ve all been a long way since the times we had at WES [U.S. Army Engineers Waterways Experiment Station].  I was collecting fish at the Cracraft dike field on the Mississippi River for my MS thesis (1980-82).  And, as I recall, you guys were on the Committee that wrote the 1987 Manual.

I didn’t have to lecture that morning and was at our lodging with my wife Pat. I turned on the TV just in time to see the second plane crash into the other Tower. At first I just thought I had happened upon the middle of a movie, but realized as the news commentators talked that it was a live disaster being broadcast on TV. I drove back to the classroom and spent the afternoon and early evening as described above.

After the immediate shock that numbed us all, began to settle in, the aftershocks began to occur. Our older son Chris, was supposed to get married in Massachusetts on Sept 22. We were in Montana and all the airports were closed. Over the next few days, the Parkers, the Straws and Pierces started exploring means to get back to our homes back east. No planes flying. No railroad tickets to be had – and the trip under best of circumstances was fairly long. No cars to rent. I remember that, I think it was Blake Parker, suggested we buy a used car and drive across country and sell it when we got back home. While Montana was one of the last states to have air travel resumed, we were able to get back to Maryland and then on to Massachusetts in time for the wedding.

The events of that day at the Twin Towers and the Pentagon prompted a lot of reflection on my part. My first job out of grad school in 1975 was with the Army Corps of Engineers (Corps) at the North Atlantic Division (NAD) at 90 Church Street in Manhattan – immediately next to the North Tower. The old Post Office building at 90 Church Street, where our office was on the 12th floor, had no air conditioning, so we always had the windows open during the summer.  From our office window I watched a man parachute off the Tower and another free climb up the outside with a gadget he had constructed. On July 4th 1976, I photographed the tall ships from many countries sail up the Hudson to celebrate the 200th anniversary of our Nation. I used to regularly visit Alexander’s Hardware Store because periodically Artie would bring down boxes of merchandise from the upper floors that hadn’t been seen for decades since his father stored it there; at Mendoza’s Used Book Store I would buy volumes printed in the 1800s on diverse topics including natural history; At Job Lots, I bought our first cross country skis; got a huge slice of pizza for a buck at lunch or lasagna with hard boiled eggs inside at Gold Star; on warm days enjoy the street musicians in City Hall Park; daily read the protest poetry chalked on the streets; and I used to ride daily to and from Hoboken, NJ on the PATH train under the Hudson River to the exit beneath the Twin Towers. 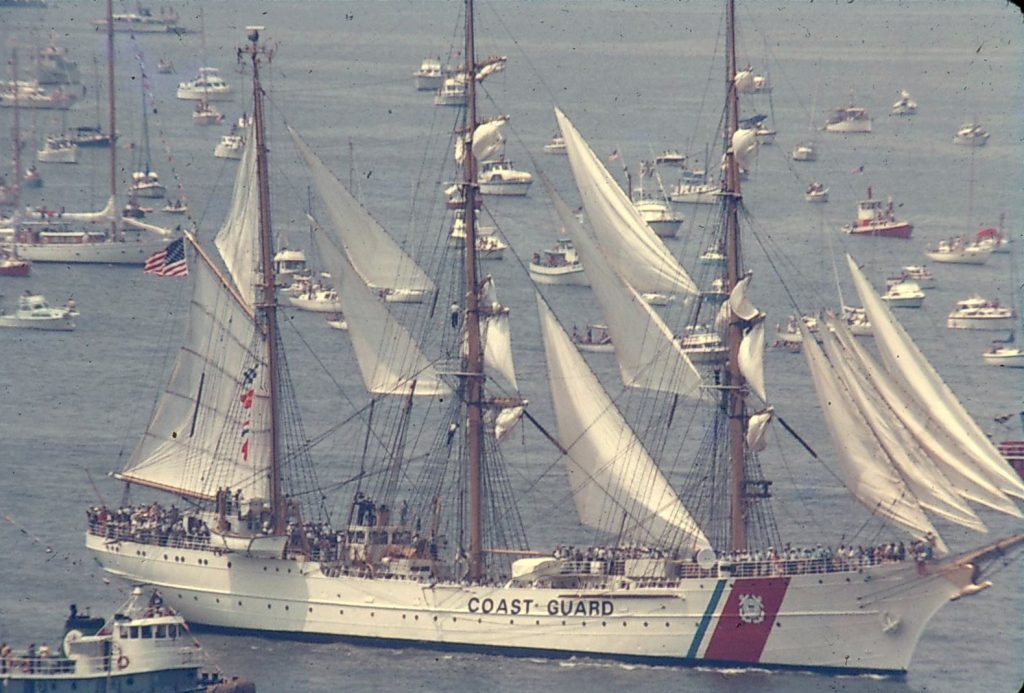 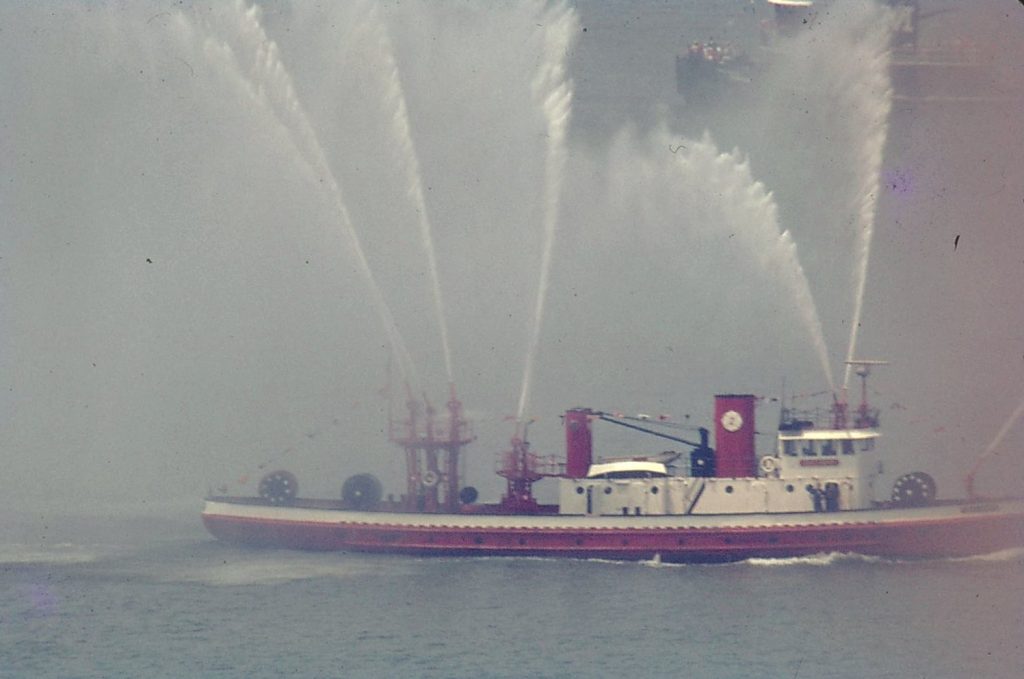 Some of NYC finest first responders strutting their stuff in the July 4, 1976, Parade of Tall Ships.

It was not until February 2015, that I returned as a private consultant to lower Manhattan for the first time since I had left in 1983. I was there to attend a meeting with the NY District Corps on a pipeline project I was working on. I had the good fortune to be working with Major General Steve Rhoades (retired) on the project that brought us to New York. Coincidently, Steve had been the Corps NAD Commander on 9/11/2001 and had supervised much of the cleanup operation in lower Manhattan afterwards. 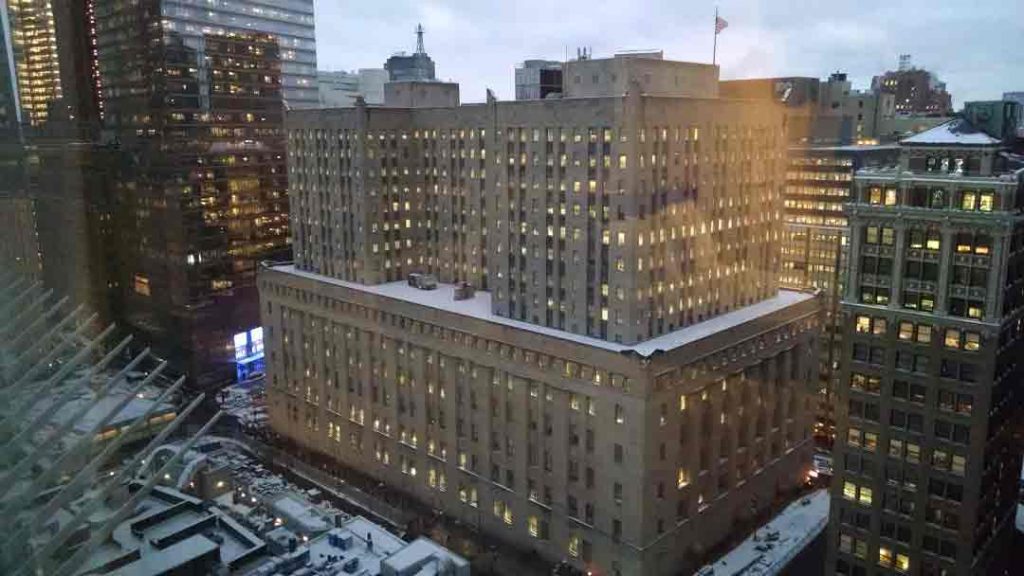 Intentionally, I took the train form DC to Newark, NJ and then got on the Path to the “Towers.” I was shocked that 15 years later, the Path station beneath the Towers still looked like a construction site and that all the streets above ground were congested with police on every corner and demolition and construction actively occurring. Much of the area where the World Trade Center had been was still a pit. I learned that my old office building at 90 Church, though not physically damaged itself, had been closed for two years after 9/11/2001 for the removal and clean-up of all the airborne debris and contaminants that came in the open windows that day. 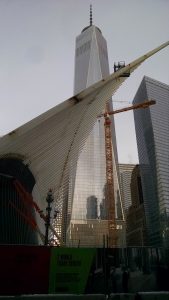 I looked for my old haunts. None of them were still operating. In front of the North Tower, where in the 70s, every workday I exited the building to cross the street and go into 90 Church and then back at the end of the day, there had been a large, bright red, steel work of modern art that I thought looked like two large snowplow blades. Not to my taste. I never even checked to see what the title of the piece was – gone now.

Replacement construction for the Twin Towers. The shorter, tall building on the right is behind 90 Church and remains from pre-9/11. When the Twin Towers were standing, they were so tall that they captured the wind streams from aloft and funneled it down between them and that tall building. The wind was often so strong that they had to string a rope across the street so that pedestrians could hang on when they walked (2015).