Tales from the Swamp: Sweepsnakes 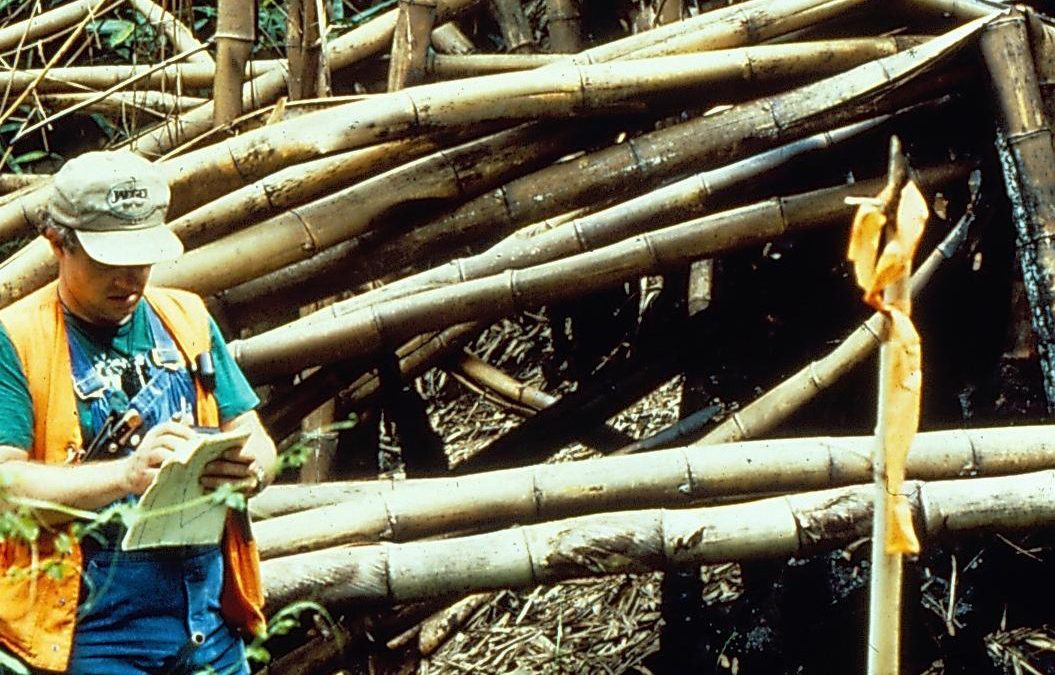 Zoe, in our 2021 BWD esession asked: What is the weirdest or most unique site you have been to for delineation if you can say?

Zoe: I’ve had a lot of interesting experiences. Never really thought about the mostest. One interesting site was a 60 acre parcel on Guam. To start with, getting a handle on the exact extent of the property was a challenge because we learned that professional surveyors on the Island often chopped off chunks of property from their clients and titled it in their own names.

Another interesting fact was that Guam, geologically, is karst formation, meaning that there were a lot of subsurface caverns and the like that resulted when water dissolved the limestone. We learned that during WWII, the Japanese had set up their field hospitals down in the subterranean caverns. When the U.S. marines landed, they paid locals, by the head, to go down in the caverns to decapitate the Japanese soldiers. Purportedly, that is how the owner of the land that sold it to our clients had earned enough money to buy it in the first place. Since WWII, Guam has been a trust territory of the U.S. and all the federal laws of the U.S. apply there.

When we arrived at the capitol, Agana, it looked like Paramus, NJ with all the U.S. chain stores down the main drag. While driving to meet the clients (Mainland Chinese), the only static-free radio station (in keeping with the Paramus deja vu, had American Rock’n’Roll Oldies playing) informed us that Saturday was the first Greater Guam Sweepsnakes (no misspelling). Guam had been infested by poisonous brown tree snakes from Australia (maybe in cargo flown in by the U.S. Air Force). First prize was a brand new pickup truck. Rules were that the snakes had to be dead; could be in no more than three pieces; and could not be frozen. Hoping to rid the island of the unwelcome invaders, the sponsors were disappointed that the winner only brought in 8 dead snakes.

I am not fond of snakes venomous or otherwise. While sitting in a Denny’s the first morning with the clients waiting for breakfast to be served, I computed on a napkin, based upon the estimated population of snakes and the area of Guam, that there should be about 120 snakes on the parcel that we were about to delineate. Staring out the window of the Denny’s I saw an Ace hardware across the street. I excused myself, walked across the street into the Ace and bought a machete. Brown tree snakes are egg-eaters and rear fanged so they have to chew on you a while to inject venom. Any snake that was going to chew on me was going to be introduced to my new, best friend, Mr. Machete.

When we arrived on site, a jeep came driving thru the dirt road. An expat was driving the jeep. He told us that had he had driven thru the area the week before and a large monitor lizard had rushed out of the forest and attacked the wheel of his jeep. Think Komodo Dragon!

As we prepared our gear to go into the forest, a pickup truck with two guys in the front and 4 or five in the back drove thru and stopped. They said they worked for the local surveyor (his first name was Generalissimo) and we’re on their way to another property. We chatted about this property. I asked them if they had come across any brown tree snakes while working on it. They said that the snakes stayed in the bamboo and you didn’t normally see them during the day. Within a half hour we were crawling on all fours thru a stand of bamboo growing thicker than a corn field.

There were three of us working on the delineation: Charlie Newling, Tom Heineke and myself. We decided that we’d all climb to the highest part of the property and Charlie and I would flag two sides of a stream and Tom would go into the next drainage and start flagging that stream. As soon as we stepped into the forest, the ground was alive with rustling! Mr. Machete was in my had in a flash!

About every square foot of the leaf-strewn, ground surface had one or two small lizards scurrying about rustling the leaves. We had no choice but to accept the nerve-wracking conditions and plow on. While we were working, there was an emergence of flying termites – it looked like it was snowing upwards against gravity. At that point and in addition to the lizards, we had toads about the size of softballs leaping into the air catching the flying termites. 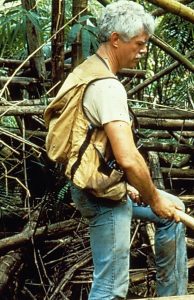 We each had small walkie-talkies. After a while Tom calls and says that he is walking thru grass that is over his head (Tom was about 6’3″) and that there is a dog near by barking and snarling, but he couldn’t see it. A little while later, we tried to call Tom, but couldn’t get a response. Turns out our walkie-talkies only worked line of sight.

Charlie and I continued walking down each side of the intermittent stream flagging until we came to a sink hole that was about 30′ deep. The stream ended there. When flowing, the water just poured over – karst!

Charlie and I finally got back to the road, having tried but failed to contact Tom numerous times. After a while, Tom came out of the forest. After our last contact he said that he had kept walking thru the tall grass until the earth fell away beneath his feet – karst! Fortunately, the sinkhole was only about 10′ deep and there was rotting bamboo that had broken his fall and he hadn’t hurt himself.

“Near the end of a long hot and humid day,” Charlie remembers: “you were complaining about all the creepy crawlies we had encountered, as we were emerging from a thicket of tree high bamboo. Just then a hollow bamboo stem about 4 inches in diameter toppled from the canopy landing on your head with a hollow sounding “thunk”. You looked up cross-eyed at the 4 inch opening just beyond your forehead expecting any minute that a brown tree snake would emerge but that hollow stem turned out to be unpopulated.” 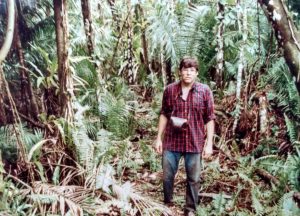 We finished the delineation without incident – no snakes nor monitor lizards. The clients took us to dinner at a fancy Japanese restaurant, at the end of the delineation. They were dismayed when we explained to them about the karst formation. The one engineer (a Japanese National that had been educated at Florida State University) who spoke the best English and was translating for the other clients said that he remembered something about karst from his academic training. Their dismay stemmed from the fact that their project was to be a large commercial/industrial park with the central feature being a lake. We told them we thought that constructing a lake that held water may be a problem.

We let the clients order various dishes for us. One that came out was a dish of deep fried objects that looked like breaded meatballs. We were told they were prawn balls. Charlie looked at their size and said “Oh, I wouldn’t have thought prawns would have balls that large!” The client sitting next to him that hadn’t spoken a word of English started laughing – without any translation. Another dish was thin slices of pickled jellyfish tentacles that the English-speaking client said they called “rubber bands” – and indeed that was the texture. 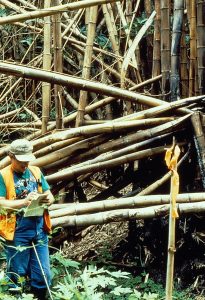 Twenty hours of flying and were back home!

A few years later, I was doing a delineation class in Toledo, Ohio. One of the participants was a supervisor at the Guam EPA. He was on vacation in CONUS and decided to take the course. He told me over lunch, that the day before he flew out of Guam, one of his employees had talked to him in the morning and related the experience he had during the previous night.

The man said that he was sleeping and had this dream that he was out fishing and got a hook stuck in his finger. The harder he tried to remove it from his finger, the more the hook sunk in. It was sufficient to awaken him. At that point, he noticed that a brown snake was trying to swallow his finger. Freaked out, he jumped up and found the machete that he had left on his dresser and promptly severed his relationship with the snake.

His supervisor, who was taking our course, told him to do two things: first, go to the hospital to be checked out; and second, to report the incident to the DNR because, as far as he was aware, it was the first instance of the snake attacking an adult. His employee said that he felt fine, but that the incident has caused him to reexamine his life style. He said that he normally slept in the buff, but that he was now rethinking that!

Great remembrances, Bob! Good times (?)! Thanks much for sharing!